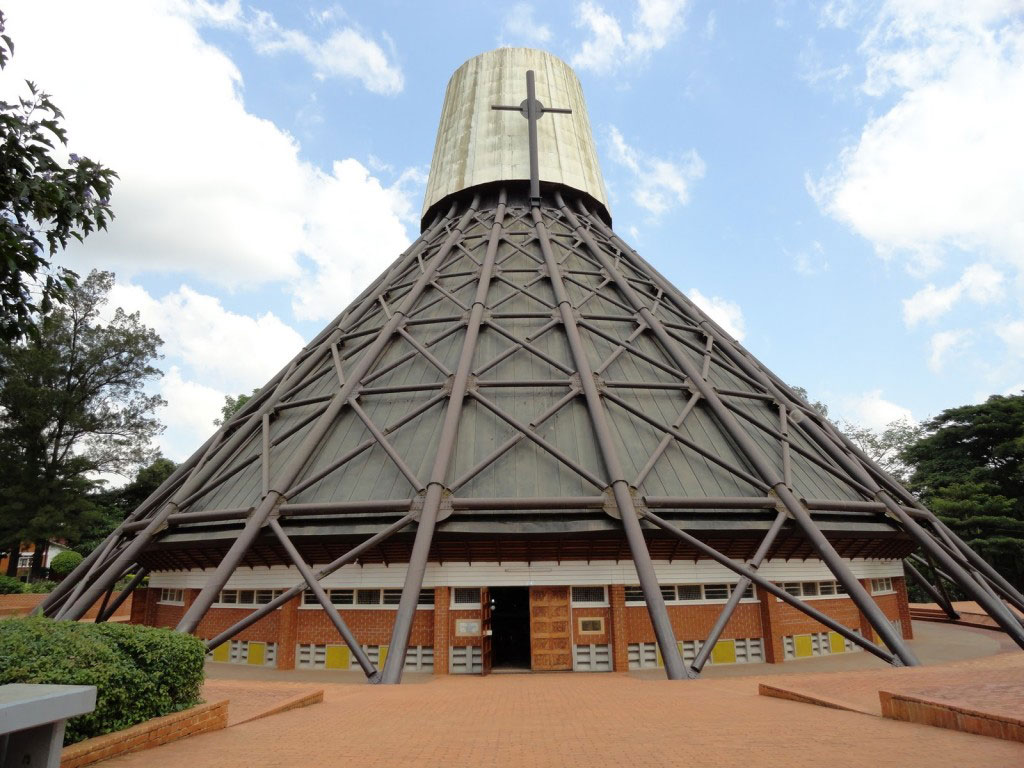 INTRODUCTION ABOUT THE UGANDA MARTYRS

Christian Missionaries that later led to celebrating the Uganda martyrs, both Catholic and Anglican, arrived in the interior of Africa during the late nineteenth century. The first Catholic Missions were established by the White Fathers, A Missionary society founded by the French Cardinal Charles Lavigerie, the archbishop of Algiers and Carthage. (The white fathers took their name not from the color of their skin but from the color of their tunic). As early as 1878 when he was asked by the Pope Leo XII to take charge of the missions in the Equatorial Africa, Lavigerie began a series of annual caravans’ journey to Central Africa as part of the Catholic evangelization of the area. The next year, a catholic mission was founded in what is now Uganda.
The largest and most powerful of the local ethnic groups were the Baganda, a group in which the European missionaries took interest. Edward Rice (a friend, incidentally, of Thomas Merton) offers an overview of the importance of missionaries and the Baganda people in his book captain sir Richard Francis burton, a biography of the Victorian explorer and linguist. Rice recounts that the Baganda were among the richest and most advanced tribes in Central Africa. Moreover they “bore a certain patina of civilization that was to astound Europeans later, with well-organized bureaucracies, statesmanship of a superior order, finely developed arts and architecture and usual handicraft.” yet, the civilization also had a dark side, according to Rice with both rulers and subjects having a reputation of being “Unnaturally”.

ACCESSION OF KING MUTESA IN 1860’S CONTRIBUTION TO THE UGANDA MARTYRS.

Mutesa, the ruler of the Baganda, exemplified this cruel streak. When he took the throne in 1860, to ensure his own political survival, he buried alive all his sixty brothers. Yet, he adopted a more or less benign approach to the Christian Missionaries. (Butler’s lives of the saint’s calls him a” not unfriendly ruler “). In essence, Mutesa allowed his subjects to choose among any of the faiths being imported into his Kingdom-Catholic, Protestant or Muslim. In turn, each group attempted to assert its influence on the king’s court through the conservation of the high ranking officials. Mutesa however pointedly did not choose any one creed. In 1884 he died, still adhering to the local traditional religions.
Conservation to Christianity among the Baganda meant a rejection of the traditional religions. It also implied setting aside of the traditional ways of life, an adherence to a new set of moral and religious standards, and often the establishment of a new set of alliances, based on religious belief. As a result, the group of new believers (called Abasomi/Readers) came to be regarded with suspicion by other Baganda as dangerous rebel faction. During the reign of Mutesa, however these suspicious group were kept under check.

ACCESSION OF KING MWANGA’S CONTRIBUTION TO THE UGANDA MARTYRS

With the accession of his son Mwanga, the situation altered dramatically. As a young man, Mwanga had shown some favor to Christian Missionaries, but his attitude changed as soon as he took over the throne. According to tradition, the Kabaka was the Centre of all authority and power in the kingdom, and he could use his subjects as he wished. But the presence of missionaries was severely diminishing his authority among the converts. Mwanga was also a practicing pedophile, and upon discovering that the young men who had converted to Christianity were beginning to reject his sexual advances, he grow enraged. As a result, the king thought to eliminate Christianity from his kingdom and began a violent persecution of the missionaries and the new Christians.

In January of 1885, Mwanga had three Baganda Anglicans Joseph Rugarama, Mark Kakuumba and Noah Serwanga, dismembered and their bodies burned, hence this led the raise of the Uganda Martyrs. In October of that same year the newly arrived Anglican Bishop, James Hannington, was murdered along with his Caravan on their way to the region. In response, Joseph Mukasa, a senior adviser to the Kabaka and a recent Catholic convert, reproached Mwanga for executing Bishop Hannington without having offered him the customary opportunity to defend himself. Mwanga, furious at what he saw as Mukasa’s insolence, had him beheaded on November 15, 1885. Mukasa become the first of the Uganda Martyrs among the black Catholics on the Continent.
Among those now in obvious danger was the head of the royal pages, Charles Rwanga, who had been instructed in the Christianity by the white father who was now Mukasa’s successor in guiding the young converts. The day of Joseph Mukasa’s death, Lwanga went to Catholic mission with other catechumens (those who were receiving religious instructions) and together with them he was baptized by Simeon Lourdel, one of the white fathers. Among the pages was Kizito, aged fourteen and happened to be young among the Uganda Martyrs.
Their saga is being told by a current day white father, Aylward shorter, of the Catholic University of East Africa, in Nairobi. Today this order has reverted back to its official name, Missionaries of Africa. According to Fr. Aylward Shorter, the next day the pages were summoned into the royal court by the enraged Kabaka. The king had learned one of the young pages in his court, Mwafu, had been receiving religious instructions from another page, Denis Sebuggwawo.

CALL FOR CONFESSION BY THE KING

The king demanded that the pages confess their allegiance. All but three of the Catholic and Anglican pages did so. Mwanga apparently baffled by this solidarity, put off their executions. At one point Charles Lwanga echoing the stance of another, earlier Uganda Martyr, St Thomas more stated allegiance to the kingdom of Buganda, declaring his willingness to lay down his life for the king. He would not, however abjure his faith.
In February, afire in the royal palace impelled Mwanga to move his court to a lodge on the banks of Lake Victoria. While there, Charles Lwanga protected several of the pages against the king’s violent sexual advances. Mwanga by this point had already obtained the consent from his chiefs to kill the Baganda Christians. Around this time, Lwanga secretly baptized five of the Catechumens who had to join the Uganda Martyrs.

JUDGEMENT DAY FOR PAGES BY THE ROYAL COURT YARD

On May 26, the pages were called into the royal court yard to hear their fate. From this point on the story of the Uganda Martyrs closely resembles those of the early Christians. Fr. Lourdel, who had repeatedly pleaded for an audience with the king, was an unwilling witness. All of the men declared that they were prepared to remain Christians until death. in the end, Mwanga declared that all of the sixteen Catholics and ten Anglicans be Matched to Namungogo, twelve kilometers away, where they would be burned. On their way to execution, bound by ropes and shackles, they were marched past Fr. Lourdlel, who would later attest to their remarkably calm disposition.
They were marched to Namugongo where bound with rope, shackles, iron, rings and slave yokes they waited for one week. During that time the Uganda Martyrs prayed and sang hymns, the Catholics among them recited morning and evening prayers, grace before and after meals as well as the angelus and the rosary in preparation for their deaths.
On June 3rd, before the execution of the rest of the young men, Charles Lwanga was put to death by the king’s men. He was wrapped tightly in a reed mat, a yoke was hung on his neck and he was thrown onto a pyre. Taunting his executioners, Charles is said to have shouted, “you are burning me, but it is as if you are pouring water over my body” before he died he cried out, “Katonda” or “God”.
His companions were killed in the same gruesome fashion. Aylward shorter writes, “as the flames rose, their voices could be heard praying and encouraging one another.” the last words of the young Kizito were “Good bye friends, we are on our way.” Hence the Uganda Martyrs.

CANONIZATION OF THE UGANDA MARTYRS

In 1964, Pope Paul VI canonized all twenty-two of the catholic martyrs. As the first pope to visit sub-Saharan Africa, he laid the foundation stone of the shrine to be built in Namugongo in honor of St.Charles Lwanga and his companions. The shrine was completed in 1975, and every 3rd June, the feast day of the Ugandan Martyrs is celebrated. Hence this led to celebrating the Uganda Martyrs every 3rd June. Pope Francis’ visited Uganda to celebrate the Uganda Martyrs in November of 2015 having been blessed with the visit of Pope John Paul in 1993 who happened to celebrate the Uganda Martyrs at Namugongo shrine, Pope Paul VI happens to be the first pope to arrive in Uganda that is back in 1964 as he celebrated the Uganda Martyrs. Pope Paul VI was the first reigning pope to visit the sub-Saharan Africa. Uganda becomes the only African nation to have three papal visits and it also happens to have hosted the Archbishop of Canterbury.
Uganda being a blessed country, it happens to be the pearl of Africa. hence it contains a lot of interesting tourism activities to encounter before and after the general celebrations of the Uganda martyrs. These include:- Gorilla trekking, Chimp trekking, Ecotourism, Nature walks, Mountain hiking, Rafting, Boat cruise, Bird watching, Kampala city day tour and Special tours to different lakes with Uganda and Rwanda.