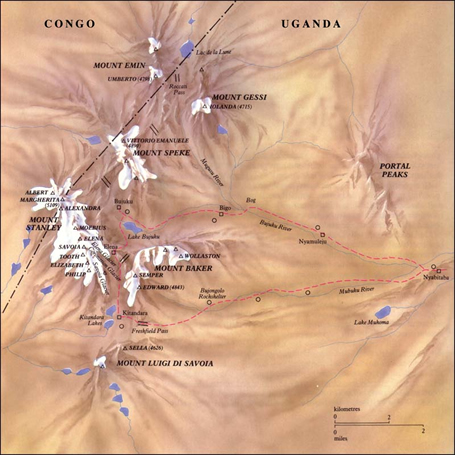 Rwenzori mountains commonly known as Mountains of the moon, was later gazetted to Rwenzori mountains national park and a World heritage and Ramsar site with an elevation of 5,109 m hence being Africa’s tallest mountain range exceeded in altitude by Mt.Kilimajaro and Mt.kenya, some of its peaks incomparable, beautiful and mist-shrouded carry permanent snow and glaciers, while the lower slopes are covered with dense forest. Rwenzori mountains run for 120 km along the Congo border.
The Rwenzori is the highest mountain range in Africa, with six glacial peaks: Mount Stanley, Mount Speke, Mount Emin Pasha, Mount Gessi, Mount Luigi da Savoia and Mount Baker. The main peaks, Margherita (5,109m) and Alexandra (5,083m) on Mount Stanley, are exceeded in altitude elsewhere in Africa only by Kilimanjaro and Mount Kenya. The first European who climbed the peaks was in 1906 the Italian Prince Luigi Amedeo da Savoia, Duke of Abruzzi.

The interest for Rwenzori Mountain National Park is also on the vegetation, which is divided into several altitude zones; the forest zone (between 1,800 m to 2,500 m), the Bamboo forest (up to 3,000 m), the heath and Alpine zones (3,000 m to 4,500 m), with forests of giants heath plants, giant lobelias and groundsels. There are more than 70 mammal species recorded (African elephants, Golden cats, Chimpanzee, Yellow-backed duiker) and more than 177 birds, especially Albertine Rift endemics (Rwenzori Turaco, cuckoo, owl, francolin and robin).

Rwenzori Mountains National Park tour itinerary includes all activities to do in Rwenzori Mountains that is hiking all the peaks however other shorter hikes are possible in the central area and in the North of Rwenzori. High mountain equipment s are required, as the trials reach an altitude of 4,000 m above.

Peak Climbing
Peak climbing hikes are organised through out the vegetation zones and the glacier peaks. There are ascents to major peaks with in the Rwenzori ranges along both routes. these include ascents to margherita(5,109m) on mountain speke and edward(4,842m) on mountain baker. These hikes offer commanding and panaromic views of other peaks with in the ranges. However, high peaks should only be attempted by experienced mountaineers.

Nature Walks
Rwenzori mountain national park nature walk allows tourists to encounter all the major tourist attractions with in the park involving sipi falls and having great scenery of different mountain features like the crater lakes.

Rwenzori mountain national park is located near Kasese, Western Uganda bordering Virunga National Park in the DR.Congo in the west. Mount Rwenzori lies a few kilometers north of the equator, rising over 4,000 m above the floor of the Albertine Rift Valley. The park trail head at Nyakalengeja can be reached from Kampala to the north via Fort Portal (375km) or the south passing through Mbarara and Queen Elizabeth National Park (450km). Nyakalengeja is 17km off the Kasese-Fort Portal road and 25km north of Kasese town. Charter flights to Kasese can be arranged from Kampala (Kajjansi) or Entebbe International Airport.

At Rwenzori Mountain National Park the accommodation facilities are some how distant in the nearby towns like Kasese and Fort portal. For instance you rest at Mountain of the moon, Ndali lodge, Kibale safari lodge, Kyaninga lodge (Luxury) Fort Motel, Rwenzori Travelers Inn (Budget) and the following day go for your mountain trekking experience.