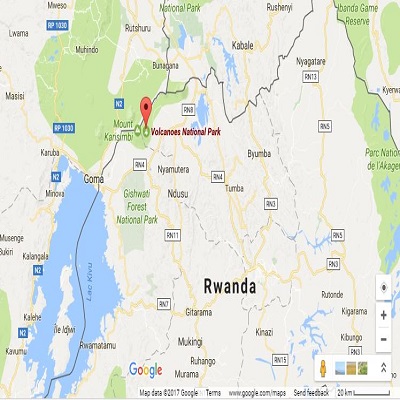 Parc National Des Volcans is best for gorilla trekking in Rwanda due to an exhilarating trek through the cultivated foothills of the Virunga that offers stirring views in all directions. Then, abruptly, the trail enters Volcanoes National Park, immersing trekkers in the mysterious intimacy of the rain forest, alive with the calls of colorful birds and chattering of the rare golden monkey, and littered with fresh spoor of the mountains’ elusive populations of buffaloes and elephants. Through gaps in the forest canopy, the magnificent peaks are glimpsed, easily accessible and among the highest in Africa, beckoning an ascent.
The bustling market town of Ruhengeri has a memorable setting at the base of the Virunga. On the outskirts of town, the natural bridge at Musanze – a solidified lava flow – is a fascinating relic of the volcanic activity that shaped this scenic area. Also within easy day tripping distance of Ruhengeri are the seldom visited but lovely Lakes Burera, Ruhondo and Karago. Ruhengeri offers a good selection of reasonably-priced small hotels and guest houses, including the newly renovated hotel Gorilla’s Nest. Visitors could also base them selves in Gisenyi or Kigali and – with an early start – head to the Parc des Volcans for gorilla trekking in Rwanda then Ruhengeri as a day trip.

Volcanoes National Park is best known for the Mountain Gorilla (Gorilla beringei beringei) hence good for gorilla trekking safaris in Rwanda and other mammals include: golden monkey (Cercopithecus mitis kandti), black-fronted duiker (Cephalophus Niger), buffalo (Syncerus caffer), Spotted Hyena (Crocuta Crocuta) and bush buck (Tragelaphus scriptus). There are also reported to be some elephants in Parc Des National Volcans, though these are now very rare. There are 178 recorded bird species hence being attractive to bird watchers with at least 13 species and 16 subspecies being endemic to the Virunga and Rwenzori Mountains. A part from gorilla trekking in Volcanoes National Park in Rwanda, more of wildlife and great scenery can reached through our 12 days pure Rwanda safaris package that combines gorilla trekking and the entire great safaris that can be done while in Rwanda. “The land of a thousand hills”

Gorilla trekking safaris in Volcanoes National Park (Parc nation des volcans) are 90% successful since the park has reportedly registered a total number of 10 gorilla groups that are habituated with in the game areas for visitors to gorilla trekking activities. Where one group is set aside for research purposes therefore a number of 80 gorilla permits are available each day for tourists interested in gorilla trekking safaris at Volcanoes national park. These gorilla groups are being formed according to unique characteristics as being displayed by gorillas from different groups, this gives tourists a wide range of choice to discover and learn different characteristics of gorillas practically. Below are the gorilla groups available at Volcanoes national park/Parc National Des Volcans:
Titus Family
The Titus group is the original family named after the Silver back Titus which was born during the days of Dian Fossey’ research at Karisoke found in volcanoes national park. Titus at his early age, he lost his family members to poachers and some of his brothers and sisters joined other families leaving Titus to be raised by an unrelated male gorillas in Volcanoes national park. According to Dian Fossey the researcher, Titus the infant who was under developed seemed to bare difficulties in breathing.
Susa group
Susa group is well known for being the group studied by Diana Fossey during her time in Rwanda that is from 1967 to 1985, it becomes the most popular family with previously 42 members before the split. In 2008 the group of 42 individuals split into 2 hence forming Karisimbi group commonly known to be Susa B. Susa A group is well known for its twins Byishimo and Impano who were named after the river flowing through its home rage with in Parc National Des Volcans.
Karisimbi group
Commonly referred to as Susa B having separated from it’s original group Susa in 2008. It is made up of 16 members including 2 silver backs and it inhabits the upper slopes of Mt. Karisimbi located in Volcanoes national park. The group has established their home high in the upper slopes of the mountain hence creating need for serious mountain hiking so as to trek them hence creating more energy for gorilla trekking.
Amahoro group
Amahoro is a Kinyarwanda word that means peace, the family is known for its peacefulness which on the other hand has caused its silver back to lose some members into another group called Umubano. Amahoro means ‘peace’ and the group has lived to the expectations of her name and is regarded as the most peaceful group. Trekking this group involves a great mountain hike to Mt. Bisoke slopes where the group established her teritories.
Umubano group
This family happened to break away from Ubumwe silverback as a result of constant battles between Charles and Ubumwe the two head silver backs, Charles consistently challenging the supremacy of the leader Ubumwe. Charles eventually succeeded in breaking away with some members hence forming Umubano group.
Hirwa group
This family was formed in 2006 by some members of Sabyinyo group and others from 13 group (Agashya). More gorillas joined in and now the group is composed of 16 members including one silver back. The group derived its name from its formation process that was out of luck. Hirwa meaning ‘the Lucky one’, the group got twins in 2011. Hirwa group inhabits the foothills of Mt. Sabyinyo to the side of Mt Gahinga.
Sabyinyo group
This happens to be the nearest and easiest gorilla group to track inhabiting the gentle slopes between Mt. Sabyinyo and Mt. Gahinga. The group is popular for its giant silver back known as Guhonda which has kept its main challenger, Ryango out of the family to remain as a lonely silver back. The group is composed of 13 members including one silver back.
Bwenge group
This group was formed as early as 2007 by Bwenge, and named after him the group’s dominant silver back, after he had left his initial group and was joined by females from other groups. The group occupies slopes of Karisoke volcano between Karisimbi and Bisoke mountains and had witnessed dark times when its 6 infants died. The group has however recovered and now has 11 members including one silver back.
Agashya group
Agashya group is named after the initial family that was led by Nyakarima, who was later over thrown by Agashya meaning the ‘New’ which is now the new leader hence the group is named after him. Today the family has grown to 27 members including one silver back (Agashya). This group happens to occupy the same territory with Sabyinyo group but sometimes Agashya takes his group deep into the mountains.
Ugenda group
‘Ugenda’ happens to mean ‘on the move’. The group was named after its unique behavior of roaming from place to place. It consists of 11 members including 2 silver backs and wonders around Karisimbi area, and this has made the group a hard one to trek.
Kwitonda group
Kwitonda group happens to migrate from Democratic Republic of Congo, which was named after its dominant silver back called Kwitonda meaning the ‘Humble one’. Because of its migration background, the group wonders in the lower slopes of Mt. Muhabura, The group is composed of 23 members including 4 silver backs.

The main activity done at volcanoes national park is Gorilla trekking, there are eight habituated groups open to tourists, allowing for a total of 80 permits per day. Tourists spend an hour with the gorillas, Golden monkey visits, Climbing of Karisimbi volcano – this is a two day trek with overnight camping at an altitude of 3,800 m, Hiking of Mt.Bisoke volcano – one day, Tour of the lakes and caves and Visiting the tomb of Dian Fossey.
The majority of revenue from tourism goes towards maintaining the park and conserving the wildlife.The remainder goes to the government and (around 10%) to local projects in the area to help local people benefit from the large revenue stream generated by the park.

Ruhengeri is a 90-minute drive from Kigali city. One can access to Ruhengeri from Kigali either by private vehicle or by public taxi minibus. If interested a gorilla tracking, you will need to organize your own transport from Ruhengeri town to the park boundaries, where you will continue your trip on foot.Still the park can be accessed from Uganda, Burundi and Congo.

Among the luxury lodges at this park include the Gorillas nest lodge, Virunga lodge, overlooking the Virunga volcanoes and shimmering lakes Ruhondo and Bulera, Sabyinyo Silverback Lodge that has stunning views of the folding hills and rolling landscape that defines this part of Rwanda.