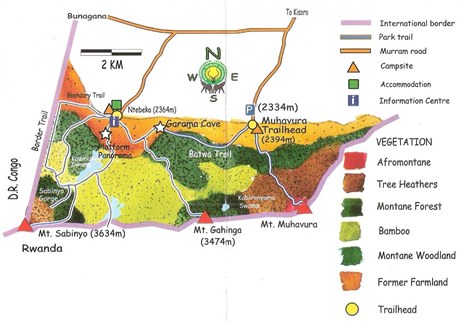 Mgahinga Gorilla National Park derives it’s name from “Gahinga” a kinyarwanda word meaning a pile of volcanic lava stone heaps around which cultivation done. Muhavura means a guide and Sabinyo means the old man’s teeth. it is bordered by DR.Congo in the west, and by Rwanda on it’s south.
Sabinyo is deeply eroded with rough shap points protruding, deep gorges and ravines, Gahinga is occupied by a swamp filled crater that covers around 180m wide at its summit, while at the top of Sabinyo you happen to set a foot in all the three countries that make this conservation area. I.e. Uganda, Rwanda and Democratic Republic of Congo at the same time. It’s sight of the volcanoes and gorges with the cool breeze of freshness is better than everything of the same type. As you move towards some of the steep mountain slopes, we happen to encounter caves formed by the steep mountain slopes, and these are formed by lava tubes, one of them being the famous Garama cave located near Ntebeko that happens to be the park headquarters.

The vegetation is the one typical of afro-Montane areas, with a consistent bamboo forest. There are 76 mammal species recorded, including Buffaloes, Elephants, Bush bucks, Golden monkeys, Leopards. 115 bird species have been recorded, including Rwenzori turacco, Crowned Horn bill, Black kite and crowned crane. Mgahinga hosts a population of golden monkeys and a few families of mountains gorillas called Nyakagezi a trans-boundary species to Democratic Republic of Congo, Uganda and Rwanda.

Each of the three volcanoes can be climbed with in a one day trip hike as recommended by the lonely planet, without special mountain equipment. Visits are organized to the Garama Cave, near the Park Head Quarter in Ntebeko, which is 432m. In length and was once inhabited by the pygmies population. The main attraction is Gorilla tracking to the only one habituated family of mountain gorillas which is not reliable due to it crossing to three countries that is (Uganda, Rwanda and Congo). A one day nature walk is available from the gate at Ntebeko (the Sabyinyo Gorge trail and Rugezi Swamp trail), especially for bird watching activities, visit to the Batwa cultural centre and the Golden monkey trekking is now famous.

Mgahinga Gorilla National Park happens to be the second home for gorillas after Bwindi Impenetrable National Park in Uganda. The tour guide enables you track down gorillas through out the park surrounded by wild forest and impressive bird life and golden monkey viewing, the trek explains gorilla’s behavior. Tracking excursions start from Ntebeko entrance gate at around 8 AM and it takes 2 hrs to 4 hrs. For a better Gorilla Trekking Safari in Uganda this article would be of great help.

Hiking all the three volcanoes and reach their summit in Mgahinga gorilla national park is possible, that is taking a full day for hiking each mountain. Great scenery of Rwanda, DR.Congo, the Virunga, the Rwenzori, Lake Edward and Bwindi impenetrable forest can be reached while at the peaks of different mountains.

Mgahinga Gorilla National Park offers one of the best Birding Safaris in Uganda with it’s registered over 115 bird species hence taking most beautiful scenery in the gorge between Gahinga and Sabinyo, hike through the bamboo forest, and in the montane forest that habitats beautiful Rwenzori turaco.

Hiking up to the foot hills of the Virunga volcanoes gives tourists one experiential story as they come across a lot of beautiful scenery since they reach most of the interesting areas with in the park to spot forests birds, the rugezi swamp, wild vegetation, bamboo forests and glorious views of agricultural villages and the surrounding lakes.

Encountering different communities around the park that have been occupied by pygmies(Batwa)for generations, Mgahinga’s forests are known to be homes for the indigenous Batwa hunters, fierce warriors and fruit gatherers who depended on the entire forests for survival. Now days some of them are tour guides who guide tourists through the forests as they describe, demonstrate and show how they used to survive will in the forests.


How to get to Mgahinga Gorilla National Park

For clients who want to visit this park, accommodation can be organized from the basic Camp-site to the luxurious full board hotels, these include Travelers Rest, Sky Blue, Mount Gahinga Rest Camp, Virunga Hotel, Mgahinga Safari Lodge, Rugigana Campsite and Mubano Hotel.