LION “THE KING OF THE JUNGLE” 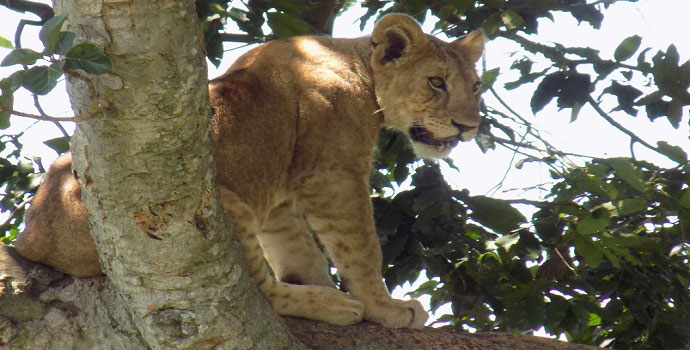 The King of the jungle only really social cats, with the females doing most of the hunting while the males ward off attacks from nomadic rivals.
The lion is the largest of the big cats, two to four times the weight of its cousins, the leopard and cheetah. It is more social than other cats and also shows greater differences between the sexes. The male weighs up to 50% more
than a female and has a mane which is fully developed by four years old.

Young lions have a spotted coat which gradually, over the first two years, becomes a nearly uniform tawny. Like many of their prey, lions have a slightly accouter shaded coloration: apelage darker on top grading to lighter underneath. This tends to neutralize the three dimensional shadowing created by over head lighting from the sun, as the shadow is lightened by the whitish belly fur. The overall effect is to enhance camouflage by flattering form.

Lions are widespread in wooded and bushed habitats. Although they are often seen in completely open grasslands, they prefer areas which have cover for hunting and hiding their cubs. They appear to succeed in maintaining healthy populations in most game parks and reserves.

Lions are predominately active in the evening, early morning, and intermittently through the night. they tend to spend nearly all day light hours resting or a sleep in the shade.

Females may produce as many as six litters during a lifetime. Lionesses come into season sporadically, the periods between heats vary from a couple of weeks to months. Oestrus last about a week, during which time males compete over receptive females. Male coalition partners, who test females as they wander over the pride’s range, are rarely aggressive towards each other in competition over potential mates. they seem to operate an agreed first come first served system.