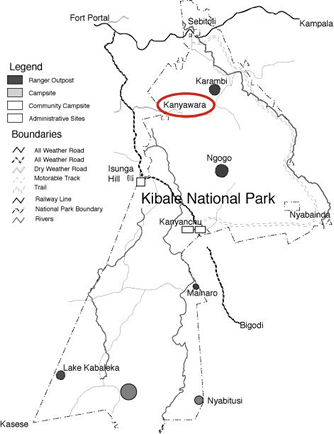 There contains one of the loveliest and most varied tracts of tropical forest in Uganda. This is home to a host of forest wildlife, most famously 13 species of primate including chimpanzees.
Kibale National Park”The primate capital of the world” is the most magnificent of Uganda’s tropical rain forests and one of the most rewarding areas to explore. Kibale forest National Park was established at the end of the 18th century, kibale national park habituates 13 species of primates including the East Africa’s threatened Red colobus monkey, L’Hoest’s monkeys, Black and white colobus monkey, Blue monkey, Grey-cheeked mangabey(Uganda mangabey), Red-tailed monkey Potto and Bush baby.

Kibale National Park’s major attraction are chimpanzees who’s population goes up to 1,450 hence making Kibale forest national park a big habitat for chimpanzees in Uganda and Africa at large, the delightful apes, most closest to humans than to any other living creature. These can be met along a Chimpanzee trekking safari through the forest trails. While you enjoy your tour in this sunny side of nature, you have a life opportunity to sight over 335 bird species. Kibale Forest National Park also habits mammals like the elusive forest Elephants, Buffaloes, Giant forest hogs and half a dozen Antelope species thereby making it one of the most stunning parks in Uganda.
Kibale Forest National Park is ideally situated in the heart of the Tooro kingdom in western Uganda, the park lies close to the tranquil Ndali Kasenda crater area and is within a half days drive of Queen Elizabeth National Park, Rwenzori mountains and Semiliki National Parks. Kibale Forest National Park became a government forest reserve in the early 1940s.

Forest covers predominates in the northern and central parts of the park on the elevated Fort Portal plateau. Kibale is highest at the parks northern tip which stands 1,590m above sea level.

Northern Kibale is also the wettest area, receiving a mean annual rainfall of up to 1,700mm, mostly during March-May and September-November.

The climate is generally pleasant with a mean annual temperature range of 14-27oC. Temperatures are highest (and rainfall lower) in the south where the terrain drops down onto the hot rift valley floor and forest gives way to open grassland. Kibale National park covers 795km2,forms a contiguous block with Queen Elizabeth National Park, on an altitude of 1,100-1,590m above sea level. The vegetation is dominated by the tropical rain forest.

The main attraction to Kibale National park is Chimpanzee trekking, habituation and filming” from Kanyankyu gate. The second main activity is bird watching at Bigodi Wetland Sanctuary at Bigodi a trading centre just outside the Parks boundary, the activity consists of a guided walk through the Magombe swamp, with the possibility to see among others the great blue Turacco and the papyrus gynolek. Nature walks are open in the Park, to see primates, birds, reptiles, medicinal plants.

This enables you to accompany Kibale’s researchers and habituates as they follow chimpanzees during their daily activity, thereby getting them used to human presence with out altering their natural behavior. This is an all day activity, it involves watching chimpanzees all day right away from the time they get out of their nests, feeding, copulating, hunting, breast feeding, resting, patrolling and displaying until they build new nests as they prepare for a night.

Chimp trekking requires permit booking in advance, it involves tracking in groups of six people per chimp group. it takes you 2-3hrs to carry out a trek. it always starts from Kanyanchu tourist centre.

Kibale National Park habituates 335 species of birds. Therefore bird watchers can spot various species of these birds as they encounter different activities with in Kibale Forest National Park. Bird watching safaris a long Kibale forest can be combined with other birding areas with in the country. The provision of night nature walk which allows visitors to encounter different unique species of birds animals and insects such as Owls, Bats, Pottos, Bush babies, Civets, Eastern needle nailed that are always more active at night and the Genet cats.

This is an exploration of Kibale National park’s diverse habitual providing very close contact with nature, the walks begin early morning at around 8:00am, it takes around 2-3hrs where a lot will be come across such as the naked Adam and Eve tree.

Children aged 12yrs and below are offered educational walks of about 1-2hrs followed by creative activities like pond dipping, cyanotype photography and batik- making. Through these educational forest walks, the children can learn about the ecosystem and it’s inhabitants.

Kibale National Park is located in western Uganda, 26km south-east of Fort Portal town. Kanyankyu River Camp, the primary centre for tourism activities, can be reached from Kampala either from the north, via Mubende and Fort Portal, or the south through Mbarara and Kamwenge. The northern approach is shorter and quicker, with a 300km tarmac road running to Fort Portal followed by 36km on murram to Kanyankyu.
Sebitoli Forest Camp, a secondary tourism centre, is even easier to reach. This stands directly on the Kampala road, 16km before Fort Portal.Public transport runs throughout the day between Kampala and Fort Portal (passing Sebitoli) and Fort Portal and Kamwenge (passing Kanyankyu).