A waterfall is a place on a river course where water flows over a vertical drop. Waterfalls are usually formed on the upper course of a river where there is enough energy to cause erosion of the soft rock layer. Water flows fast over the hard rock and also the soft rock layer found on the earth’s crust. The powerful force of the flowing water causes erosion on the softer rock that is over lied by the hard rock and the continuous action of erosion leads to formation of a steep drop. It is from this drop that the flowing water cascades downwards forming a plunge pool with the aid of erosion and hydraulic force. This later on forms a gorge which is an interesting feature to see on a river.

In Uganda, Murchison falls and Sipi falls are a must see waterfalls for any tourist interested in sightseeing safaris. Their location, nature of the cascading waters and the beautiful sceneries near them makes them breath taking waterfalls in Uganda. Murchison falls is located particularly on the Victoria Nile a section of the Nile River which has its source on Lake Victoria in Jinja. Seeing the cascading water force itself through the narrow gorge and a boat cruise downstream at Murchison falls can be extremely an interesting experience you can ever have when you visit this place. At this very falls lies Uganda’s largest park Murchison falls national park which covers 3,840 km sq. and an elevation ranging between 619-1292 metres. If you’re planning a birding safari in Uganda this park can be your ultimate birding destination. It has 450 recorded bird species including the Abyssinian ground hornbill, Red necked Falcon, Egyptian plover among others that will give you a real birding experience. Murchison falls national park also gives you an opportunity to do game drives as you view the herds of Giraffes, elephants, buffaloes and reptiles like the alligators. The hot air ballooning safari at this park will give you a bird’s eye view of the entire park and on the return route you can pay a visit at the Ziwa rhino sanctuary for rhino trekking. 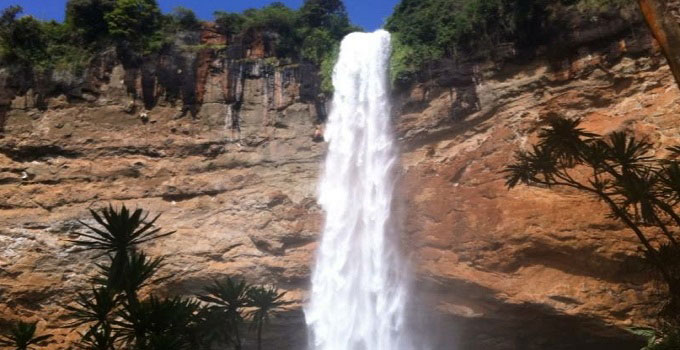 Sipi falls is located on river Sipi which flows from mountain Elgon located in the eastern part of the country. The fall has 3 sections; the first and second stages are located within Sipi and the third section is in Gamatui which are magnificent for your sightseeing. All these sections are located in Kapchorwa and are suitable places where hiking and trekking to Wagagai peak of Elgon starts. For any traveler who is on a hiking adventure safari this is a place to be. Your hiking adventure reaches climax when you reach Mount Elgon national park which has a lot to offer you. With 300 recorded bird species, Mount Elgon national park gives you an opportunity to experience what highland birding safari is like. The Jackson and moorland Francolins will take your birding to another level. Visiting the nearby communities can be another activity you can engage in. The Sabin in Kapchorwa have a rich culture and are well known athletes who have won the country golden medals for example Steven Kiprotich. The Bagisu in Mbale are known for their Imbalu traditional dance usually conducted during circumcision ceremonies where young boys are passed from childhood to adulthood (men). Their traditional cuisine called Malewa is an amazing dish you could taste while on your Uganda safari to Sipi falls. If you are planning a sightseeing safari in Uganda, make Murchison falls and Sipi falls a must see on your list and you will have an interesting holiday that is unforgettable.