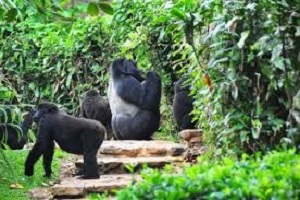 Where to go trekking Gorillas in Africa

When it comes to gorilla trekking safari destinations in Africa, think of two tracking places in Africa that is Uganda and Rwanda since they do habitat more than a half of the world’s gorilla population. According to reviews posted on trip adviser site, no tourist has re-grates concerning gorilla trekking safaris conducted from with in the two mentioned destinations. Here are 5 reason to consider before choosing a tour operator in Uganda.

Uganda habitats gorillas in the south western parts of the country that is Bwindi Impenetrable National Park ,Mgahinga National Park and Kibale National Park, hence ranking her as the best gorilla trekking destination in Africa, since Bwindi impenetrable national park is one major habitat of gorillas in the world, therefore learn how to get prepared for a great gorilla trekking tour in Uganda. More to gorilla trekking safaris in Uganda one can venture into other various Tourism activities like game drive safaris, camping safaris and bird watching safaris. Her being the pearl of Africa, Uganda is considered to be a birding paradise because of her rare bird species exceeding 1000 in number that always hang around the showers of lake victoria and her un tounched vegetation during different climatic seasons across the globe.

At kibale National Park, we “hit two birds using one stone” where by we stand a chance of coming across different primates while doing our gorilla trek safari though kibale National Park is commonly known for its out standing chimps therefore its good for trekking chimpanzee safaris in uganda, hence making it the second best gorilla trekking destination in Uganda.

In 1967, the American zoologist Dian Fossey who had been doing research on mountain Gorillas in the forests of Congo fled from insecurity and established her research base at a place between Visoke and Karisimbi volcanoes that was yet to be known as Karisoke research center hence resulted into formation of different gorilla groups in Parc National des volcans in Rwanda.